Up Mont Ventoux and Down to Nice…well, almost

It’s been a week now since we got back from our little journey from Paris to Nice, so I thought I had better post the story of the second half of the ride, before the memories fade behind newer ones of work, weddings and wet british weather. The last report finished on the night we arrived in the town of Puy en Valle. A lovely hotel with a certain New York Chic about it. The highlight of the night was watching John take part in a scientific experiment to analyse the effects of 350ml of Leffe on the body of a tall, skinny man who’s just cycled 100+ miles 4 days in a row. Official results will be published in an academic report, but findings will include an inability to stop giggling like a schoolgirl, and what can be best described as an ‘optomistic’ attempt at looking sober at the dinner table.

Day five dawned and there was the risk of a rain shower, so Carl decided it was time to pay homage to Mr.Boardmans secret squirrel club by creating an aerodynamically advantageous helmet cover with the help of his shower cap.

Fortunately, the showers never really materialised, and as we rode into the Ardeche Gorges, the road went up as did the temperature. After what felt like a mammoth climb out of the town, the road then “Rolled” all the way to a coffee stop at Courcheron. At this point we should clarify the term “Rolling”. In England, this is usually used to describe a road that rolls over some small hills that one can use power to keep the speed over before motoring along on the flat. In French, it has a different translation, and that translation is “start climbing. continue to climb until you reach the foot of another climb, then climb the climb that follows the previous climb”. I may have had a slightly skewed view of todays particular translation since my chemo-affected body decided that today it was going to disagree with my request to ride a bike for another 8 hours or so. I have to admit, that I really struggled for the whole morning and was feeling particularly sorry for myself by the time I arrived in the village to find it was market day where people looked at us strangely as we did the dance of the Cleat through the throngs. I reached the cafe and had a ‘moment’ to myself before Brad and Craig placed a bag of freshly purchased salami infront of me and someone else wedged a cold bottle of coke into my hand, thanks guys, I’ve never needed it so much! The next phase of the day is a little bit hazey for me, I’ve just been using google maps and my gps tracking file to try and figure out where we stopped for lunch etc, and I still can’t quite work it out. But something must have improved as I remember a short afternoon coffee stop, where myself, Adam, Brendan, Craig and Karen stopped outside a stunning Citadel village for a hot-chocolate, before roaring through the start of the Ardeche gorges before re-joining the rest of the team who had stopped a little further on. From then on, we weaved our way en-masse (I’m loving all these pseudo french phrases I’m managing to get in, are you?!) to our nights stop at the bottom of the Gorge in a nice countryside hotel where we had our own courtyard which rapidly turned into a makeshift bike workshop. Here, bikes were washed, cassettes were changed and wheels swapped for lighter climbing versions (no wonder the Pedal Precision wagon was full to the rafters!)…..because tomorrow we all had a date with destiny, and it was called MONT VENTOUX.

Day 6 – There are a number of apprehensive faces around the breakfast table this morning. Reports of the run-in to Mont Ventoux vary anywhere from a 50mile flat ride to a 75mile rolling one (that word still brings me out in a sweat a week later). As it turned out it was nearer 70, and with a couple of chunky climbs to get us out of the gorge and a stop for some much needed bread and jam at about 39miles, we arrived in Bedoin, the town at the base of one of the most spectacular mountains in france feeling ready to attack the climb. Most of us opted for a lighter lunch and a rest before re-mounting our bikes and heading out of town.

Ventoux….Legendary, and a little bit scary.

We had been able to see Ventoux from about 40miles away and by the time we started to climb for real I felt like I already knew the climb and the mountain was calling me up to her summit. We settled in to a rhythm on the climb and a headed into the forest. John, Dan and Carl set a really strong pace and the rest of us found our own tempo and slowly counted down the km markers as we reached each one and it told us what the gradient for the next would be. The forest was steep, the forest was hard, but the forest was mostly wind immune. Then we came out of the forest, and were hit by the 60-70mph gusts that we had heard about. It was like riding into a cold, unbalanced, but very sturdy brick wall! The wind was coming from behind our right shoulder as we made our way up one stretch of road, then we turned a hairpin and were battered by a head/side wind of truly satanic proportions. I’d like to tell you that I ‘doffed’ my helmet as I passed Tom Simpsons memorial, but at the time I was simply trying to turn the pedals and stay upright.

One more hairpin to go, and after being blown into the gutter and almost down the side of the cliff, we’d made it to the Summit. We were cold, tired, almost broken, but very proud. All that was left was a breathtaking 40mph+ descent all the way down to the village of Sault where there was a great meal of Tagliatelle waiting for me and a comfy bed (although it could have been made of a pallet and a rug and I wouldn’t have cared).

Well, I thought that I would take you all the way to Nice with me with this post, but I fear I have rambled on enough already and may be losing some of you to the draw of refreshing your twitter feeds or an episode of Road to Glory that you’ve sky+’d, so I’m going to save the stories of delight and disaster of the last few days for another installment. Stand by.

Half way to Nice!Bike Fit, Cycling, Everything, uncategorised 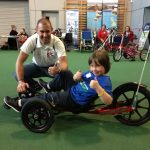 Armstrong, Drugs, Cancer… careful, this could be profounduncategorised