Cycling: Are we taking it all a bit seriously?!

It occurred to me the other day, that I couldn’t think of a sport where there are so many different aspects , eliciting such a wide range of emotions across such a varied set of population demographics.

Bear with me, it’s not nearly as boring as it sounds. I mean, there’s obviously a range of emotions involved in all sports; love, hate, passion, anger, joy, pain, determination. These are just some of the feelings you may have either competing or being a fan of a sport. But in recent years cycling has come to mean so much to so many different people. From those of us who come a little bit more alive every time we turn a pedal and feel the wind in our faces, to those who despise everything about cyclists because they see them flaunting traffic laws or think they look ridiculous riding round in bunches crammed with varying degrees of success into unflattering lycra outfits.

I want to make it clear from the start, from a traffic point of view, I can see both sides of the argument. Being a cyclist I see incidents where misplaced anger on the part of a car driver carelessly endangers lives, and I cringe when I see another cyclist swerving round pedestrians and striking out across a red light regardless. I despair in equal proportions. However, I think the only way to make any difference on that front is a radical change in attitude in the hope we can change from an atmosphere of confrontation on the road to co-operation on both parts.

But I digress, my point is simply that cycing seems to touch and effect so many peoples lives, for all sorts of reasons. I’ve never heard of a rugby team that gets blasted by horns and pushed off their pitch because someone needs to get to the shopping centre, but neither have I heard of a game of squash that has been an epiphany for someone who had been told to lose weight or risk becoming a statistic (I’m sure there are a few out there, but I don’t hear about them regularly like I do with the purchase of a bike).

This is how it should be! (from www.cyclinghumor.com )

Working on behalf of a charity specifically founded to give children suffering from cancer the chance to ride a bike again, sometimes when they thought it wouldn’t be possible, really drives home the joy side of our sport. Most of us will be able to remember finding that bike under the christmas tree one year or going to chose one from a shop on your birthday, there just aren’t that many things like it. To be able to be the one who hands this type of gift to these children is a truly humbling experience. If you haven’t already, go to www.cyclistsfc.org.uk , take a look, and then use one of the ways to donate, you won’t regret it!

There’s also not many other sports where the heroes and villains are highlighted in such stark contrast. Gerraint Thomas’ ride through the pain barrier to finish the 2013 Tour de France will be remembered as an act of mind-bending heroics, whilst the fact that Danilo Di Luca has just banned for life for his 3rd, count ’em, 3rd drug related charge. And these things whip up another hurricane of emotion. As a cyclist and cycling fan we see things on a monthly basis of which we can be massively proud and massively ashamed in equal measure. It seems like one moment we are watching medals being handed out to dedicated, down to earth, inspiring and clean athletes at World level both able bodied and Paralympic, and the next minute we’re watching Oprah, enough said. Even amongst cycling fans, there are those who would rather attempt to ignore the discretions of the cheats or ‘laugh it off’ for fear of it lessening their enjoyment, but thankfully there are just as many who are trying to change things. And then there’s all the people outside the sport who try to suggest that cycling is just one huge doping ring, but are happy to keep it as a scapegoat as long as people don’t look too closely into other sports which maybe they are passionate about.

The thing is though, that it doesn’t seem to matter how many people slate cyclists, take the mickey, throw mud at the sport because of the publicised cheating, vent on forums about how they hate all the lycra clad middle-aged men racing around the countryside on bikes worth more than their cars, cycling is still winning people over and making people fall in love with it hand over fist. I should really do some research on the number of people spectating and participating in different sports to give you some statistics, but my anecdotal ramblings would risk becoming some kind of Dave Gorman-esque slideshow (sorry Dave!). All I know is that I meet people on a daily basis who have come to feel as passionate about cycling as they drifted away from many other sports or past times.

And then there’s the flip-side. After that initial joy, people somehow become tainted, and the sport of cycling has become riddled with animosity between groups who essentially practice the same past-time, but that see themselves as different or better than others. Some mountain bikers think road cyclists are miserable bastards who spend all their time grimacing on the road and not enjoying a single second, whilst some road cyclists look at someone riding an MTB and see an undeveloped Neanderthal akin to a Beavis and Butthead character on 2 wheels.

But, and this is the point, and to take a quote from a great film “You’ve got to ask the right questions….like, has anything you’ve done made your life (as a cyclist) any better”. The answer to this for all these conflicting opinions and emotions is no. I’m not saying people can’t have favourites amongst cycling disciplines, and I’m certainly not trying to discourage healthy debate, but all the animosity, all the infighting between groups of ‘niche’ cyclists, has any of it actually made you a better cyclist, or a better person for that matter?

Even something that on the surface looks like it can only be used for good, can be turned by some into something aggressive, bad humoured and sometimes even dangerous. I am of-course, talking about Strava. It really is a great concept and very well executed. Now, if we could just remember that we don’t ride on closed roads and that it is meant to be a bit of fun and friendly competition over some select pieces of our favourite routes, things would go a lot smoother. Instead, it’s become a monster. People have created sprint sections along flat roads littered with junctions and traffic lights.

Then everyone loses their senses and starts riding as if their lives depend on it, riding straight through lights and swinging out of junctions at crazy speeds. I don’t want to sound all health and safety here, my point is, we need to not take it so seriously! – Enjoy the competition, see if you can climb the leaderboard on your local climbs, but don’t let it define your ride. I’ve heard of some people who actively spin as slowley as possible to the start of a (usually flat) segment, only to break themselves over a 1km long stretch and then drool their way home again. I ask the same thing: is that really improving your cycling experience??

In conclusion then, whilst we can’t do much about those who we share the road or trail with, we can do something about how we treat and respect each other and those around us, so let’s lighten up, and see if we can’t bring the rest of the population with us. Say thanks to the motorist that gives you a wide birth, smile and wave at fellow cyclists and women on horses, wait at the lights, feel the wind in your face, congratulate the person that takes your KOM, ride like it means something to you and finish with a smile all over your face, I am all but convinced others will start to join in when they see how good a time you have on your bike!

As if to underline this, there was one team at this years Tour that seem to take more pleasure in the blessing that their job is to race bicycles…. I can’t imagine Mr.Brailsford and co. doing something like this, but prove me wrong Team Sky – break out the Status Quo! In the meantime, I give you Orica Greenedge, take it away fellas! 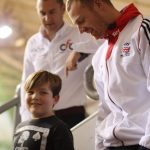 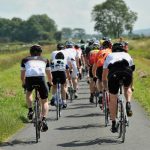