The Program: a My First Film Review production

It’s been a while since I managed to find time to sit down and write a blog post, I promise there’ll be more relevant bike fitting and advice blogs on the way soon, as well as an updated website and some more exciting news soon, watch this space. In the meantime, I hope you’ll find a short film review worth a read.

I am no Kermode, not even a hint of a Winkleman (no pun intended), but since this was a) a film that I had been looking forward to seeing, b) I had special interest in the subject matter as both someone in the cycling industry and a cancer survivor and c) I hadn’t been to the cinema for about 12 Months since the birth of my daughter, I thought I would make some notes after it finished and pass on my thoughts to you now.

The overriding sensation I came away with was mild disappointment I’m afraid. It seemed like a bit of a missed opportunity to be honest. An opportunity to really ‘get under the skin’ of the characters as they say in promotional interviews for all good films. Seriously, I was hoping to see the film-makers really get stuck into the relationships Armstrong had with those he was friends with, those he intimidated and some he tried to destroy after they chose to speak out against him. Instead, what we got was a really rather simple storytelling exercise into some of the hows, whats and wheres of what went on over a 15 year period from the time pre-cancer diagnosis to the ultimate downfall and inevitable Oprah confessional.

That’s not to say it was a terrible film, it wasn’t, and if you had no idea of the story before going to see it I’m sure it would have served you well as a piece of entertainment and a run through of all the main characters and what happened, it’s just that I think so much more could have been done with the story. Maybe it was a case of my knowing too much already so it was really just a re-telling of the things that have been in the papers and half a dozen biographies of involved parties that we’ve already read, I’m not sure. Thinking about it, this may have been a big part of the problem, most of the target audience for this film will be cyclists or cycling enthusiasts, who would have been following the story for a long time and know most of the ins and outs of things.

So as enthusiasts, we need more, we need to see at least some interpretation of psychological toll paid by Armstrong through living a lie for so long, and the effects on the lives of others affected by the story. There was no appearance from Greg LeMond who is arguably a reverse barometer of Armstrongs own fall, rise and fall again in that initially LeMonds stardom was only boosted by the emergence of a new US cycling superstar, to then be effectively destroyed by Armstrong after what many would deem a fairly innocuous wondering over the veracity of Armstrongs comeback, to the phoenix rising from the flames once the truth came out. Even the central character of David Walsh, whilst ably represented by Chris O’Dowd, did not really get exposed, outside of a couple of scenes where he was made an outsider at the tour, it would have meant so much more to have gotten some sort of insight into the effect his pursuit of exposing the doping going on within the peleton and specifically at US Postal, was having on his personal life, career and mental well being.

If anything, telling a ‘deeper’ story would I feel, have been good for all parties involved. It would have enabled us to see further into the human implications of the competition, the cover ups, the lies and the litigation. It could have given the opportunity to see Armstrong as a human being and maybe, although this would have involved putting ego to one side long enough to have been involved in the making of the film, helped us to understand the motivations of someone who ended up on the path that he did and the toll it may or may not have taken on his conscience as well as the psychological effects on those left damaged by the rolling fireball that was ‘his’ team.

Another emotive element to the story for me, is that of the cancer survivors’ relationship with the story as it has evolved. The film makers touched on this a number of times, showing Armstrong mildly conflicted after an appearance at a cancer fundraising benefit gig, and also giving him a moment of softness when he wants to stay with the young cancer patient regardless of his pressing schedule. I guess this is the sort of thing I was hoping to see more of. If nothing else, could it have helped me consolidate what is still a greatly conflicted opinion of the man in my own mind? Having held him on a pretty high pedestal both during and after my own cancer treatment in the early Noughties, slowly coming to the realisation that the man didn’t seem to be the sort of person I would actually want to know even if I got the opportunity, to the exposure of the cheating in all it’s blood transfusion bag glory. As I’ve said before, I can understand the drug taking, I can even understand the proliferation of the lies, but as Adam Hills of The Last Leg fame would say, there’s no excuse for being a dick! And I think that’s part of what I was looking for from the film; more measures of whether or not the story-tellers thought that on balance, there was still a redeemable character in there somewhere or whether it would simply be better to forget Armstrong ever existed at all despite all the inspiration I managed to draw from his books and escapades during my own struggles. But the film sadly didn’t give me any more guidance to mold my opinion on this one way or another, hence another source of my disappointed feeling.

Prior to watching the film I had also heard a few reports from a couple of people who had recently had the opportunity to ride with Armstrong recently and presented someone different again, in a more positive light, which further added to my confusion. I would be interested to know what the wider feeling of cancer surviving cyclists is to gauge how opinion has developed towards him.

There was also the obligatory continuity errors, which to an avid cyclist were a little too frequent and a little too frustrating. What is Bradley Wiggins doing on that poster in the background when it’s meant to be 2002 and he would have barely been out of school trousers by then? Similarly, why is that supposed period bike sporting a tiagra groupset circa 2014 including an external bottom bracket? things like that just added to the feeling that it wasn’t a film made for a cycling audience, but for Joe Public, the non cyclist who wants to know a bit more about this specific part of cycling in that era. This type of thing however wouldn’t have mattered so much if the rest of the film had been a real, hard hitting insight into the minds and characters of the major players.

Some of the set-pieces and racing shots were well done and gave a glimpse of what things might be like in the near future with on-bike cameras improving all the time and the feel of being inside the peleton for an actual live race situation would be pretty special.

So there you have it. It’s hard to believe, as I didn’t set out to be quite so critical, and I went to the cinema with high hopes. And in many ways I was entertained for a couple of hours and it wasn’t boring per say, the film just didn’t break any new ground for me and I was left with the same questions as I had before. I have since been told that the film may have been rushed through the production process in order to be the 1st released about the subject matter. If this is the case, I look forward to seeing what others can do with the topic and the characters, I will report back here if they do appear at a cinema near me! 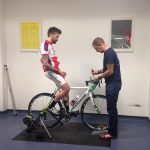 Knowledge Vs. Numbers: How do we get the perfect riding positionEverything, uncategorised